Case Of The Deep Fired PC Board

Case Of The Deep Fired PC Board

The Case of The Deep Fried M11 PC Board

Interesting case this week. A client called to tell us his M11 stopped working, and he could not get it to even come on

He went on to tell me, that it had ran perfectly on the last cycle the night before

Thinking maybe a fuse had blown, we had him take off the right hand side panel so he could check the fuses on the board

Thinking there had to be short somewhere, we had him start checking everywhere for an electrical part, broken or loose wire that could have caused the meltdown. But everything checked out okay

As we all know, your autoclave needs to be on a dedicated circuit, with nothing else on it

Even so, some seem to think that this is just a ploy for them to spend more money...or just being overly cautious

The extra device on the circuit drew away current from the autoclave causing the voltage to drop. When this happens, the internal power supply draws more current which increases the heat & damaging the PC Board and potentially other components 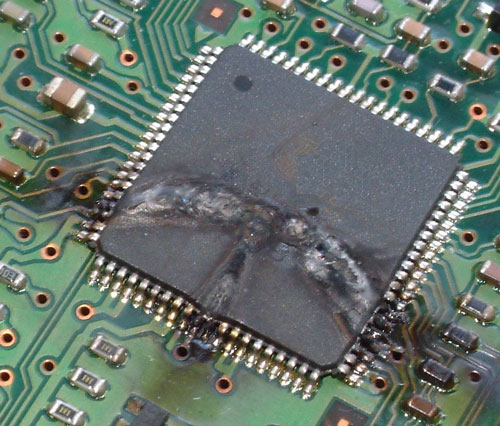 AllClaveParts.com - Autovlave Repair Made Simple is not eBay sellers who do not have a clue about what we are selling, or how the parts work. We are Professionals.....And, our knowledge of Autoclave Repair does not come from a book...it comes from years of hands on experience. We have repaired just about every autoclave on the market, and continue to repair them everyday. Our guidance is based on that experience. Our Troubleshooting Guides & Technical Support is the best you can get anywhere, and it's all free!

Get to know us
Let us help you
© 2021 AllClavePartsPrivacyTerm